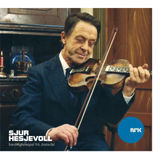 SJUR HESJEVOLL was born on March 19, 1914, on the farm Hesjevoll in Jostedalen, Luster in Sogn. His parents were Anna (b. Krokgjelet, 1875–1954) and Ola Hesjevoll (1870–1955). Sjur grew up in a large family, with two sisters and nine brothers. Like himself, several of Sjur’s brothers practised painting, woodcutting and lathe work. Several of them tried the fiddle as well, but in this respect Sjur was the master and the one destined to really devote himself to music. Sjur’s parents were proficient singers who introduced him to music at an early age. Plagued by frequent illness throughout his childhood, Sjur lacked the strength to work in the fields with the rest of his family. He has since said that this was what gave him the opportunity to become a fiddler.

His older brother Hallvard (1899–1972) brought home a small violin he had bought for three kroner, and this became Sjur’s first instrument. At first he didn’t have a bow, so he learned songs and tunes by picking the strings. Later on his brother Olav (1905–34), an occasional fiddlemaker, gave him a Hardanger fiddle. In 1930 Sjur, then 16 years old, played his first championship, Sognastemna in Årdal. He finished second, and the prize money of 10 kroner was quite a large sum for a sixteen-year-old.

Over the years, he appeared at a large number of festivals and championships, taking home a string of prizes. But to Sjur, the prizes themselves were less important than the opportunity to play for an interested audience. He had a knack for holding audiences under his spell, and thus Sjur and his fiddle were often the centre of attention at championships and festivals. But if there was too much small talk among the crowd, he would resolutely put his fiddle away, arguing that the audience showed insufficient interest in his music.

Sjur would often play at dances. During W.W.II the Germans closed down the community centres, but this did not put a stop to the dances and parties, which retreated into private homes for the duration of the war. The music was usually supplied by Sjur and his fellow villager Olaf Sperle (1900–71). Sjur was an active member of the Sogn fiddlers’ group, at times acting as the group’s musical director. He shared his tunes freely, and picked up quite a few from other members as well. A gifted teacher, he travelled around Sogn holding week-long fiddle seminars. In this way, he has left his mark on the whole of Sogn. In 1954 he started the Jostedal Fiddlers’ and Dancers’ group alongside Lars Stølen (1923–2008), Olaf Sperle and a number of other fiddlers.

Sjur did not resent the growing popularity of the accordion. Instead, he collaborated with accordion players, thus extending the usefulness of his tunes. His collaborations with accordionist Oddvar Stegegjerdet (1940–84) became especially popular, and together they recorded several albums of Jostedal round dance music and their own compositions in the traditional style. Sjur never raised a family, and remained at Hesjevollen until he passed away in 1994.

JOSTEDAL MUSIC AND SJUR’S PLAYING STYLE
Sjur took up the fiddle while still a child, and was taught by several Jostedal fiddlers, among them Martin Halveg (1885–1966), Olaf Sperle (1900–71) and Johannes Ormbergstøl (1893–1949). Another teacher was Nils Bjørnheim (1872–1943), who would sing him tunes or play them on a Jew’s harp. The Jostedal repertoire included both traditional forms and old time dance music, with a strong bent towards the springar. The tunes mostly have a simple structure with a strong emphasis on rhythm, but they also display strong character in the use of unusual intervals and melodic embellishment. Influences from the traditional music of Gudbrandsdalen and Nordfjord are especially prominent, explainable by way of Jostedalen’s long-standing status as a nexus for travelers across the mountains. Influences from the Filefjell area are also in evidence. Because Sjur also drew tunes and inspiration from records and radio shows, he built a versatile repertoire stretching way beyond local influences. Major sources were records by Telemark fiddlers Gunnulf Borgen (1881–1953) and Torkjell Haugerud (1876–1954), though over the years their tunes acquired a distinctive Sogn sound. Sjur’s playing carried a strong signature, and he had a distinctive way of shaping his tunes. Even so, he was clearly influenced by other great fiddlers of his era, notably Gjermund Haugen (1914–76) from Telemark, Alfred Maurstad (1896–1967) from Nordfjord, and Sigbjørn Bernhoft Osa (1910–90) from Voss. With his characteristic strong and supple playing style, Sjur would slide effortlessly through a wide range of expressions, from thoughtful lyricism to exuberant grandeur. His strong rhythmic sensibility made him a sought-after dance fiddler.

THE RECORDINGS
Sjur Hesjevoll recorded frequently, and recordings can be found in the Norwegian Broadcasting (NRK) Traditional Music Archive, Norsk Folkemusikksamling (NFS), Arne Bjørndals Samling (ABS), the Sogn og Fjordane county archive and in private collections. The recordings on this album were made by the NRK, NFS and Sjur Gjerde, and provide a cross-section of Sjur Hesjevoll’s work as a championship contestant, dance fiddler and champion of a proud tradition. The quality of the recordings reflects the equipment and recording environments of the time, and this obviously sets them apart from modern recordings. That said, sound quality is of little importance when compared to Sjur Hesjevoll’s musical delivery.