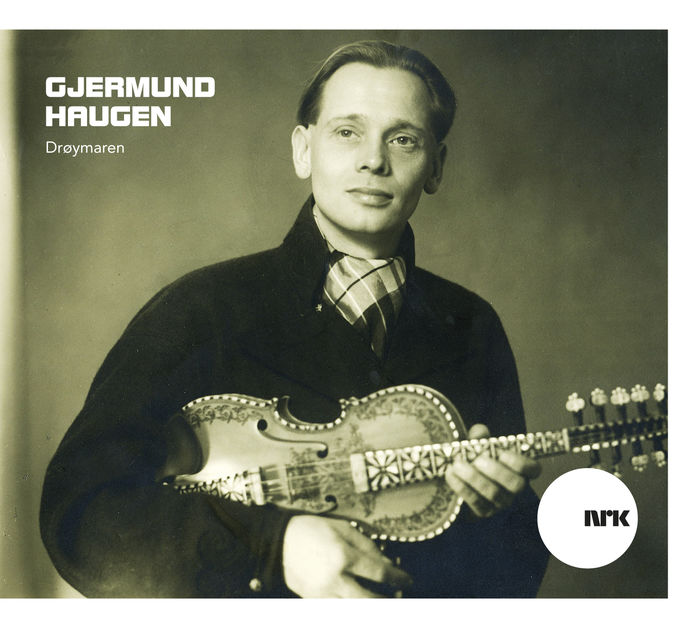 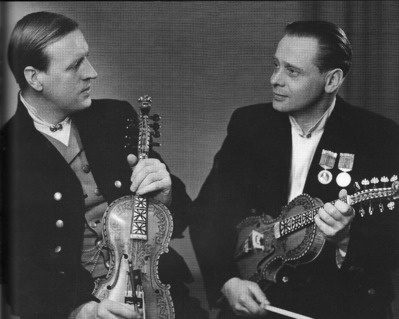 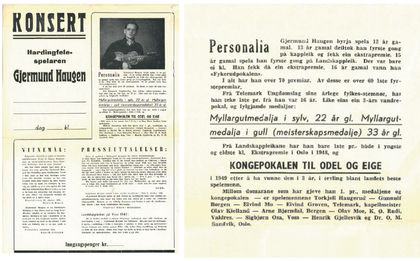 Gjermund Haugen was born in Notodden 7th November 1914 and died 25th September 1976, came from a long line of folk musicians. At the age of thirteen he had already started playing, learning most of skills from his dad. Later on his influence came primarily from Svein Løndal, Torkjell Haugerud and Johannes and Gunnar Dahle.
In tone and performance he took inspiration from the characteristic Fykerud style of play. He had his special debut, due to his age and
talent, in 1928 at just fourteen years of age.
Several of those in the audience saw his talent and urged him to persist with his playing. From 1931 and on he entered into countless of similar competitions, and to this day is the fiddle player with the most first prizes at Landskappleiken of all time. He holds the Mullagytmedalja in both silver and gold, the Fykerudpris, and the Festspillprisen, hosted in Bergen.
Gjermund managed to live of the music, receiving a grant from the federal government given to prominent musicians and artists (Statens Kunstnerlønn), along with other stipends. In addition to his private recordings there are 70 recordings in NRK’s archives containing Gjermund’s work. 18 recordings of his music was released, along with the cassette “Gjermund Haugen – hardingfele” released by Buen Kulutrverksted in 1985. His knowledge of tunes was not formidable compared to his peers, but according to those he played alongside, he played the ones he knew very well. For instance, the self-composed works Tjønneblomen and Huldremøyane dansar.
He performed at Festspillene in Bergen on two occasions. This suited him very well; being a concert fiddle player he was here able to explore his music in very creative, artistic surroundings.
The competitive scene posed special challenges to Gjermund, which he loved. The same has to be said for the venue itself. And the more people who attended, the more he enjoyed himself. Performing famous hymns on the fiddle, he was one of the first to play the instrument in a church. He also did several tours, both in Norway and abroad, travelling to Sweden, Denmark, England and Scotland.