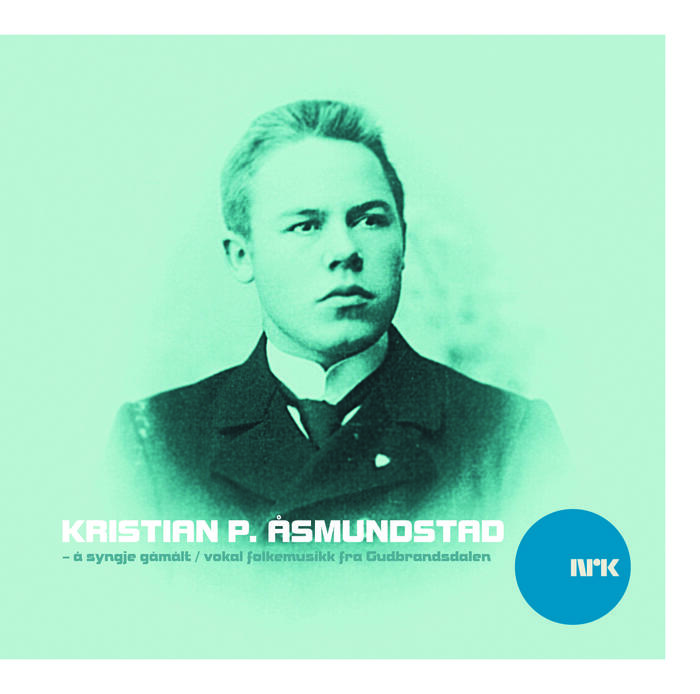 The recordings demonstrated a capable singer, truthful to his local vocal tradition, with a large repertory of religious tunes, medieval ballads, broadside ballads, lullabyes, shepherds’ worksongs, stev, slåttestev and lots of short tunes. All this material had been handed down in his family. I was fascinated by Kristian’s style of singing. He himself called it ‘singing the old way’. Kristian was aware of different singing traditions, and he adapted to different occasions. The songs on this album were culled from his 1937,1954 and 1959 NRK recordings. Kristian is one of the most significant singers from Gudbrandsdalen. His songs deserve public attention and being taken up and kept alive by people like you and me
/ Camilla Granlien

Kristian Person Åsmundstad was born at Kvikne, Gubrandsdalen, on November 11, 1885, the youngest of five children; he had one sister and three brothers. He died on March 26, 1976 at Ringebu, where he had settled in the autumn of 1926. His parents were Per Torson Åsmundstad (1839–1920) and Rønnaug Iversdotter, born Melby (1849–1947), farmers at Søre Åsmundstad. His father worked as an ambulatory school teacher in Skåbu and Kvikne until he took over the family farm in 1868. He had no formal training as a teacher. His mother worked as a milkmaid until she married. From an early age, Kristian spent his summers as a herdboy in the mountain pastures. Craving an education, he enrolled in teacher training at Hamar in 1903, having first spent the winter of 1901/02 at Møre people’s college in Ørsta. He was forced to quit school prematurely when he contracted a respiratory disease and was sent to the Reknes sanatorium outside Molde. After a few months, he returned home and took odd jobs until he could return to Hamar, where he graduated in 1915. He subsequently taught for a couple of years at a people’s college before becoming an elementary school teacher, which he remained until he retired in 1955.

Sources
A passion for culture and letters runs in Kristian’s family, especially on his father’s side. One of his great grandfathers, Per Jehansson Hågåstugun from Skåbu, and his three brothers – the eldest of which was born around 1765 – could read and write, which must have been quite unusual for smallholders in Fron at that time. Some of his relatives had taken up woodcarving or tailoring, and some were appointed schoolmasters by the local parson, among them Kristian’s father, who became a schoolmaster at the age of 16. For a time, he was also the sexton at Kvikne. The psaltery was used when teaching hymns and songs in school. He had a large repertory of songs and became Kristian’s primary source. He had learned most of his repertory from his father Tor Person (1809–1888) and his grandmother Lisbet Olsdotter, born Roven (1779–1857). They would mainly sing old hymns, mostly at home. Kristian also acknowledged picking up tunes from his mother Rønnaug and a neighbour, Anders Torgerson Massingjorde (1821–1912). During the summers spent as a herdboy at Murudalssetra, Kristian picked up a large number of local tunes from one of the milkmaids, who had a habit of singing while working. Some tunes came from Kristian’s uncle Olav (1850–1925), who was a teacher at the Møre people’s college in the years 1899–1912. Kristian stayed with him while he was a student there in 1901/02. While in Ørsta, Kristian became immersed in popular culture, and quickly joined the liberal youth movement. He later developed an interest in the New Norwegian language movement and local history, publishing a number of essays, mainly in Årbok for Dølaringen from 1903 onwards. In his book Femti år med folkemusikk (Det norske samlaget 1982, pp. 87–88), Rolf Myklebust quotes Kristian as saying that his older brother Tor (1875–1954) had been a valuable source of material.

Pål Kluften and the norwegian broadcasting corporation
There can be no doubt that Pål Kluften (1888–1942) was instrumental in bringing Kristian Åsmundstad’s musical legacy to the attention of the public. They both came from Nord-Fron, and when Kluften heard that Åsmundstad had a repertory of tunes, he was brought in to embellish Kluften’s broadcasts with songs and stories of ‘old times’. Eivind Groven’s notebooks from 1934–35 mention Åsmundstad singing folk songs in live broadcasts with Kluften from the studio at Hamar. Åsmundstad’s broadcasts from 1937 onwards can be found in the NRK archives. His last recordings were made in July 1954, when he recorded 91 tunes during a three-day studio session in Oslo. When Jørn Tore Haanshus wrote his thesis Kristian P. Åsmundstad – ei songkjelde fra Gudbrandsdalen at the University of Oslo’s department of musicology, his primary sources were the recordings from 1937 and 1954. Haanshus interviewed Åsmundstad several times towards the end of his life, and he also had access to private recordings of Åsmundstad in conversation with NRK journalist Liv Greni. Greni also did a memorial broadcast some time after Åsmundstad passed away.

Music in the home
At home and in everyday life, Åsmundstad would sing songs to pass the time. While Kråkevisa and Knut Soksen’s Heilagdagsvandring were firm favourites, he rarely sang religious tunes. On the other hand, songs by Petter Dass and Edvard Storm were put to good use. He would occasionally sing these old songs to his pupils as well, though not with an intention of passing the material on. At teachers’ college, Åsmundstad also learnt to play the violin, achieving ‘great skills’ according to his diploma. He mostly used the fiddle for teaching songs to his pupils. Had he been more interested, he would probably have learnt the instrument before going to teachers’ college. In his own words: ‘I would scratch out something and make them dance to it.’ At home he could be made to play waltzes, mazurkas and other dance tunes, but he was never a great fiddler. His singing was pleasant. Rolf Myklebust relates his impression after visiting Ringebu in the spring of 1954: ‘It was a fine performance. At 68 his baritone was sonorous and clear, his style simple and his delivery genuinely spiritual.’ Kristian Åsmundstad was modest about his musical legacy. ‘I used to sing a few old tunes and nonsense songs. Many of them were just barely fit for a sexton,’ he once said. Even so, one must assume that he knew the value of the old songs and hymns. He was aware that both Catharinus Elling and Ole Mørk Sandvik had transcribed songs from performances by his father and uncle Olav Åsmundstad. Hulda Garborg had been in touch with his uncle to get the music and lyrics for Bukkevisa and Gubben og gamla, both of which were furnished with dance steps. Olav was himself an accomplished Halling dancer and an enthusiastic folk dance instructor at the people’s college in Ørsta. Kristian Åsmundstad would have been pleased to see the current renewed interest in his song legacy, with performers like Tone Hulbækmo, Kristi Kinsarvik, Lillibeth Lunde Elgstøen, Camilla Granlien and Sondre Bratland taking up his tunes. To us that were close to him, it is good to see his recordings lifted from obscurity to remind us of Ivar Aasen’s words that our forefathers ‘gave us a heritage to treasure, more precious than most could fathom.’

Text by Per Åsmundstad, Kristian’s son, born in 1930 and living in Ringebu. A local historian and former high school and people’s college teacher, he frequently sings his father’s tunes.