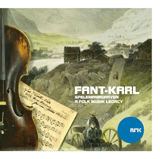 From mystery to history

The “Fant-Karl” legacy takes us into a multifaceted world of tradition, music history and Scandinavian Romani/Traveler history. It tells of cultural sharing and the love of music among Travelers and non-Travelers alike. We hope with this CD to shed light on “Fant-Karl” in Norwegian tradition and perhaps give an opportunity, through the music, to become better acquainted with the traveling fiddler Karl Johansen Rosenberg. /Mary Barthelemy, februar 2009

FROM MYSTERY TO HISTORY
The name “Fant-Karl”, or “Karl-Fant” [fant = vagabond, traveler] is familiar to folk musicians and dancers in Norway. Stories tell of an excellent Traveler fiddler named Karl in the first half of the 1800’s. Karl left inspired musicians and music in his wake as he and his family traveled throughout Norway. As years went by, the tunes lived in tradition but Karl’s identity became a mystery. Some suggested in the 1970’s that Karl Fredriksen Moen (1824–1885) was perhaps the famous fiddler, but recent discoveries indicate that “Fant-Karl” was Moen’s grandfather. In 1997, Mary Barthelemy began searching in living tradition and documents. She found that the person behind most of the stories and tunes was most likely Karl Johansen Rosenberg (c. 1775–c. 1855), a horse-gelder who traveled widely in Norway and parts of Sweden. Mary’s work is presented, in Norwegian, in her master’s thesis in folk art (Rauland 2006) and a book (Rørosmuseet 2007): • Barthelemy, 2006, “Fant-Karl – En vandring i tradisjon og historie etter spor av en electriserende taterspellmann” [Fant-Karl- A journey in tradition and history tracking an electriserende Romani/ Traveler fiddler], masters thesis in folk art, Telemark University College, Institute for Folk Culture, Rauland, Norway. • Barthelemy, 2007, Spellmann på dromen, på sporet av den legendariske “Fant-Karl” [Fiddler on the Drom, Tracking the Legendary Fant-Karl], Røros Museum, Røros, Norway.

NORWEGIAN GYPSIES
In the 1990’s, in compliance with the Council of Europe’s Framework Convention for the Protection of National Minorities, the Norwegian government recognized several national minorities. One of these, called Rom/Sigøynerne [The Roma], includes traveling families who are relatively new to Norway. Another, called Romanifolket (taterne/de reisende) [The Romani People (Taters/Travelers)], includes traveling families who have lived in Norway for 500 years. Karl belonged to the second of these, and many of his descendents today consider themselves part of this minority. Karl Rosenberg probably didn’t like the “fant-tag” given to him by non-Travelers, but his nickname has helped his fiddler-legacy survive. “Fant-Karl’s” story is a positive one, of a catalyst, a professional performer and innovator, who interpreted the latest popular music to impulse-hungry rural musicians and dancers. Thanks to living fiddle tradition among non-Travelers, hindsight can now allot Karl Johansen Rosenberg a special place in history. In the ranks of Karl’s descendents, and in his extended family, there have been many musical talents, also professionals and trendsetters who have made lasting impressions on their audiences. Two of these are accordionist “Kalle Jularbo”, Carl Carlsson Jularbo (1893–1966 Sweden) and Norwegian rock icon Åge Aleksandersen (f. 1948).

FANT-KARL TUNES
Fant-Karl tunes have survived in rural areas where traditional music has had status. They have been used and loved by musicians over many generations. Elderly informants told collectors 90 years ago that Karl played tunes for springar, springleik and pols [Polskdans/Polish Dance] in 3/4-time, and halling, in 2/4-time. But it was waltz, the “new dance music from the city”, that made him a celebrity. Waltzer, in German, means “roller”. Today, in Norway, waltz is seen as the first of the couple dances now called gammeldans [old-time dance] to sweep in from Europe in the 1800’s. But was waltz in “Fant-Karl’s” time the same as it is for us today? Probably not! Violin/fiddle was certainly the most popular instrument, and it is interesting see Karl Rosenberg (c. 1775– c.1855) in context of some other famous musicians of his time: Ludwig von Beethoven (1770–1827), Niccolò Paganini (1782–1840), Ole Bull (1810–80). Famous waltz composer Johann Strauss I (1804– 1849) was of the same generation as Rosenberg’s children. Fant-Karl Waltzes are generally simple in their harmonic structure, but not necessarily easy to play. Some are called firetur [four-tour], a name for set dances popular among the upper classes of Norway in the late 1700’s and early/mid 1800’s. A number are reminiscent of music composed for ballrooms of Vienna in the 1790’s, such as Beethoven’s Zwölf deutsche Tänze. The common theme Ach! du lieber Augustin is found in quite a few Fant-Karl Waltzes. Improvising variations on this theme was common among musicians in European parlors and concert halls in the decades around 1800. Did Karl Rosenberg also improvise while playing at gatherings in rural Norway? “Lieber Augustin” and waltz music are still with us, known and used throughout the world. And Fant-Karl Waltzes seem to be unique and Norwegian. Musicians – playing at home, for dancing, concerts and competitions – have used and loved the tunes and contributed to a flora of variants. After all these years it may be best not to hold “Fant-Karl” Rosenberg personally accountable for all of them! But many seem to retain a spark of “Karl-energy” – and will as long as the melodies stay alive and vibrating!