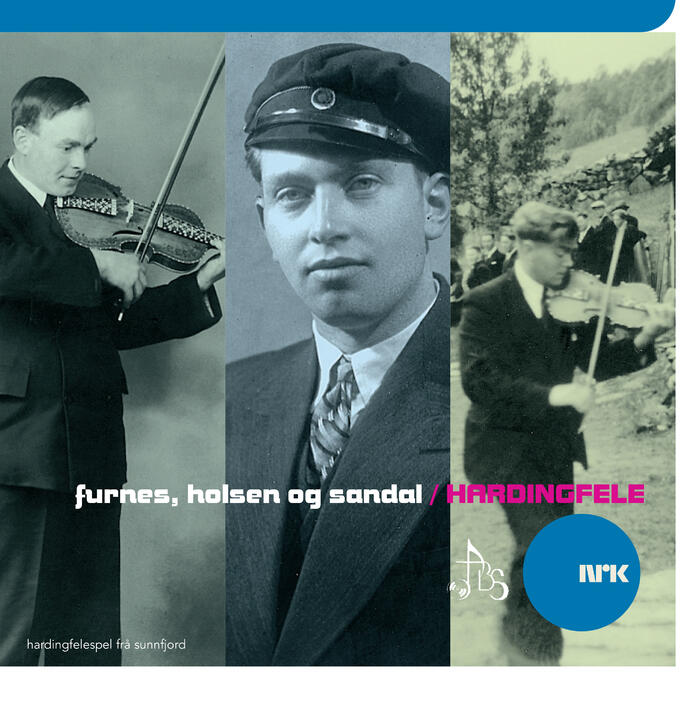 The recordings were made between 1949 and 1962 by the folk music collectors Arne Bjørndal, Steinar Kyvik and Rolf Myklebust.

In Bergen, Nils was introduced to an inspiring circle of fiddlers from most of western Norway. In 1929 he became a founding member of the fiddlers’ group Fjellbekken, where he remained an active contributor throughout his long career as a fiddler and was awarded an honorary membership. In addition to playing at dances in the city’s various cultural societies, he frequently participated in competitions.

Every summer Nils would return to Bygstad to meet with family, friends and fellow fiddlers. In particular, he was a frequent visitor to Osen farm, where he had been a farm hand in his youth, and which was also the home of fiddler Olav Johan Mo (1893–1947). The summers in Sunnfjord were spent playing at weddings and other gatherings.

A number of recordings of Nils exist, both in the NRK Folk Music Archive and the Arne Bjørndal Collection. The recordings comprise a wide selection of village dance and old-time dance tunes from Sunnfjord, as well as a substantial body of work which probably dates from his Fjellbekken days.

JOHANNES HOLSEN
Johannes Olai Holsen was born on March 27, 1910, and grew up on the farm Hetle in Viksdalen, Gaular. His father was Nikolai Ludvigson Holsen (1871–1953), from Holsen, Førde, and his mother was Olina Andreasdotter (born Hetle, 1876–1968), from Viksdalen, Gaular. Out of the family’s 9 children, Johannes was the only one to become a prominent fiddler. Johannes was taught to play by his father, who in his turn had been taught by his father, the fiddler Ludvig Holsen (1839–1892).

Johannes moved to Førde around 1930, and remained there for the duration of his adult life. The first few years he managed a café at Flaten with his sister. In 1935 he went to Bergen to become a clockmaker. Returning to Førde, he started his own clockmaker’s shop at Hafstad, incorporating a barber stool so his customers could have a haircut if they wanted to.

In the summer half, Johannes was in much demand as a fiddler at weddings and other occasions all over Sunnfjord, particularly in Viksdalen and the rest of Gaular. He participated in contests large and small throughout the area, and rarely missed a broadcast of the NRK’s weekly folk music program.

Johannes recorded both for the NRK Folk Music Archive and the Arne Bjørndal Collection, with a repertoire consisting mainly of village dance and old-time dance tunes passed down from his father and grandfather.

KNUT SANDAL
Knut Ludvigson Sandal was born at Støfring, Jølster on January 20, 1913 as one of three children. His father was Ludvig Sandal (1885–1962) from Sandal, and his mother was Marthea Andreasdotter (born Støfring, 1893–1963), both from Jølster. Knut’s early years were spent at his mother’s farm at Støfring while his father was in America. The family later moved to Strand, Jølster. At Støfring, Knut was given the nickname Lisje-Knuten (‘Little Knut’), as the neighboring farm also had someone called Knut.

Knut’s musical talent was apparent early on, and he was taught the fiddle by his father Ludvig and his uncle Nikolai Sandal (1883–1971). His uncles Anders (1878–1958) and Kristian (1890–1982) also played the fiddle. The four brothers were all accomplished fiddlers and frequently played at weddings, as a group or separately. It was said of Knut that he had a special talent for creating harmony parts for tunes, even those he didn’t know beforehand.

After World War II, Knut moved to Bergen as a road worker. Little is known of his time in Bergen, but for a while he was part of the fiddlers’ group Fjellbekken, where he was described by some as a musical genius. He spent most of his summers and holidays at home in Jølster, helping out on the farm and visiting friends. He played frequently there, often alongside local fiddlers or his cousin Erling Sandal (1922–2004), who was also a fiddler. Knut was also much in demand at weddings.

Knut’s known recordings are limited to just seven tunes. The recordings were made by Arne Bjørndal in Bergen, and consist of old, traditional Jølster tunes, springar and wedding tunes played in various tuning modes. But there are still people around who remember him playing village dances and well-known tunes from other parts of the country.

THE SUNNFJORD STYLE
Sunnfjord sports a rich repertoire of both village dance and old-time dance tunes. Many of the area’s traditional tunes are short and melodically simple, which lends them a slightly archaic character. Apart from the many wedding tunes, Sunnfjord music is primarily dance music.

Folk music collector Arne Bjørndal wrote of Sunnfjord music in the newspaper Gula Tidend on March 20, 1932: ‘The Sunnfjord tunes are often rather short, but with strong rhythm and character, fresh, sometimes naïve, but usually sprightly and humorous. They generally have a rather old-fashioned character, which shows that the fiddlers have been somewhat conservative in developing the traditional repertoire.’

‘STRANGE TUNES’
This was NRK reporter Rolf Myklebust’s excellent description of Johannes Holsen’s playing in his book Fifty Years of Folk Music. To the unaccustomed listener, some of Sunnfjord’s springar tunes may be somewhat bewildering, and it was precisely the rather unusual kind of springar frequently found in Sunnfjord that Myklebust had in mind.

The springar form customarily employs four different types of meter: non-segmented meter and three forms of triple meter: symmetrical, symmetrical with deviations, and asymmetrical. Generally speaking, asymmetrical triple meter is common in the harding fiddle territories in eastern Norway, while the other metric forms predominate throughout the western areas.

A frequent feature of the Sunnfjord springar is non-segmented meter, where the melodic structures are not readily grouped into threes, but rather base their measures on the pulse itself. The main reason these tunes are called springar at all, is that they commonly accompany this dance.

There is another group of tunes played with this dance, where the melodic phrases last for two beats. Outside of the dance context, these tunes may easily be taken to have a duple meter. But even here, the principle of pulse-based measures applies.

COLLECTING FOLK MUSIC
The collecting of Norwegian folk music started as far back as the mid-19th century, and should be viewed in light of the ‘discovery’ of folk music. In the late 18th and early 19th centuries, European folk traditions were in decay, and intellectuals started to take an interest in ‘the people’ and ‘folk culture’. A number of middle-class citizens went out into the rural communities, encouraging people to sing or play and turning the music into an object for collecting.

Until the 1930s collecting was based primarily on traditional musical notation, with all of its inherent limitations. A number of gramophone recordings were made during the 1930s, and access to tape recorders in the early 1950s completely revolutionized the task of location recording.

Two folk music enthusiasts in particular have been of importance in collecting Sunnfjord music. The transcriptions and recordings Arne Bjørndal (1882–1965) made throughout his life are now kept in the Arne Bjørndal Collection at the University of Bergen. Rolf Myklebust (1908–1990) from Nordfjord worked for the NRK (the Norwegian Broadcasting Corporation) and made a substantial number of recordings. The material he gathered currently resides with the NRK Folk Music Archive.

The sound quality of the historic recordings on this disc is markedly different from modern productions, and pops, crackle and tape hiss are a part of the ambience. The recordings were made in a period where documentation and preservation were primary goals, and accordingly never intended for releases such as this. But although the sound quality is limited by the recording medium, there is living music behind the extraneous noise, and it is precisely the tunes and the performances that are the focus of this CD.