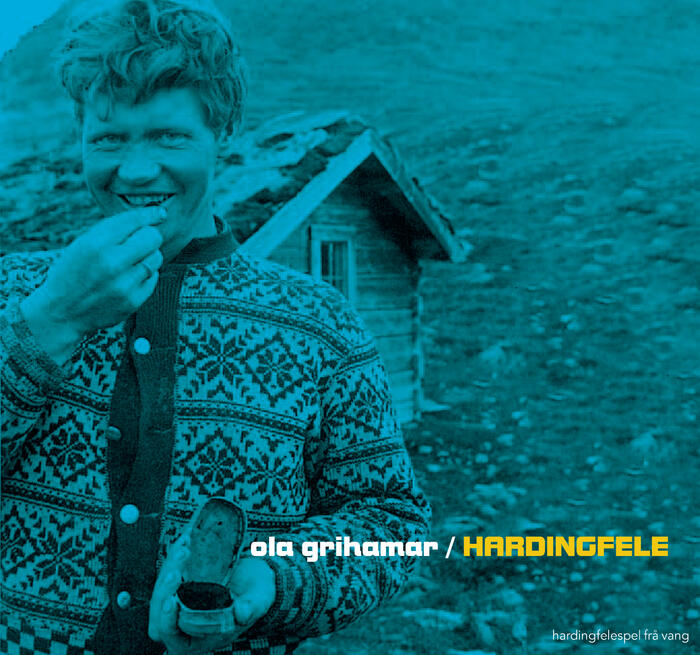 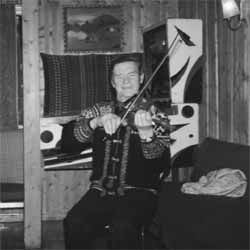 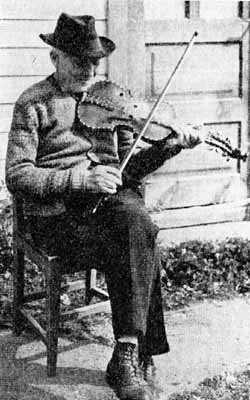 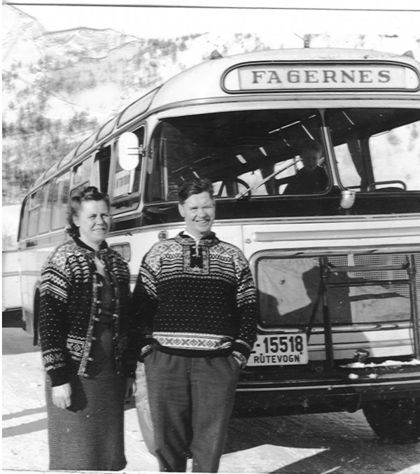 Ola Grihamar Sr was born 9 June 1910 at Skogstad in Vang and died 5 December 1978. He was the oldest of four brothers, two of whom were fiddlers, Ola and Andris. Ola had an early interest in folk music and began to play at the age of 13. There was a living folk music milieu in the neighboring area, with many fiddlers who could teach him. Among those most available were Lars Svien, Ola og Andris Skogstad, and Arnfinn Hermundstad.

Boye Skeie was a teacher in Øye for many years and a good fiddle player. He was also Ola Grihamar’s master teacher for many years. One of Boye Skeie’s fiddle teachers was Kristoffer Dæhli, who was a hotel manager at Bygdisheim. Boye Skeie was also influenced by Hallingdal fiddling. He had an excellent fiddling style, and Ola learned much from it.

Other musical sources hion.
Ola also learned a great deal from Johan Henrik Kvam, son of the great fiddler Trond Eltun. Johan Henrik was one of the last who knew the bonde dance (the Valdres form of gangar) very well and could play many bonde tunes. In addition, Ola learned many listening tunes from Johan Henrik Kvam. After a while Olav Moe came into the picture. The tune probably most associated with Ola Grihamar’s playing, “St. Thomasklukkelåtten,” he learned from Olav Moe. He also learned many springars from him, including “Firefingslåtten,” a technically difficult springar in the tradition of Ola i Hamrisbrøto, from Vestre Slidre. But Ola had a large sphere of influence.

In Lærdal there was only one well-know fiddler during Ola’s lifetime, Jen Frydenlund. Ola learned the two Hulebakk tunes from him. They are associated with the saga about Hulebakken, who lived in the mountains between Valdres og Hemsedal. No other fiddlers in Valdres played these fine listening tunes. Ola heard much Telemark music as a matter of course and was together with the Løndal brothers, among others. Voss wasn’t far away either, and Ola had contact with both Sigbjørn Bernhoft Osa and Lars Skjervheim. Ola had a much larger network of contacts than mentioned here, and he found inspiration in many places, but nevertheless the old Valdres tradition was his trademark.

Playing style
Not only his choice of tunes but also his fiddling style clearly showed the characteristics of good traditional Valdres fiddling. There’s a certain flavor to the playing that points back in time and that we don’t hear so much today. The springars are played with a special distinct rhythm that doesn’t affect the flow of the music. It is clear that Ola played much for dance and that he simultaneously mastered a good fiddling technique in his youth. It makes his playing expressive and personal. One can say that even though many tunes are short and even simply formulated, Ola has a delivery that is enviable. He lifts the simple tunes to a higher level than is often possible with many more elegantly formulated and developed tunes. He plays in a confident and decisive manner. It’s as if he is coming with a certain basic message. Rolf Myklebust wrote in the book Femti år med folkemusikk (Fifty Years with Folk Music): “He struck one as being a fiddler with substance in his music. There was no shallow, meaningless sound, it was music with soul and feeling. Grihamar had an especially good grasp of the listening tunes. And he knew what he was playing and always had something to tell in connection with the tunes.” Ola also was careful to learn the tunes correctly. He wanted to hand them down as accurately as possible, and he made great demands of himself as well as of those who learned tunes from him.

Family
He married Margit Snortheimsmarken i 1940. They had three children, Kari, Marit, and Ola. Ola Jr learned tunes from his father at an early age and is one of the few who learned directly from him. Ola’s grandson, Oddbjørn Skeie (Marit’s son), was also inspired by his grandfather. Later he studied music and performed on guitar. He is now a music teacher. Ola’s family operated the farm together, and they also ran Grihamarstølen, the mountain summer farm, as a tourist spot. They made it into a good tourist business and also built two houses in the vicinity. Ola was particularly well-suited as a host. He could use his talents as a guide and his social skills in contacts with the tourists. He often entertained them with fiddling and storytelling. Ola took over the family farm in 1934, when he was only 19 years old. He ran the farm well, and together with his family he developed it into a fine sheep farm. All this work obviously took much of his time, and there was little left for fiddling and practicing. He often said that the music mustn’t take priority over the needs at home.

Performer
Ola was used as a fiddler for many years in Valdres, especially in Øye. He made his first radio recording for NRK (Norwegian Broadcasting System) in 1957, which proved to be technically very good. He made further recordings for NRK in 1959, 1962, 1967, 1969, and 1971. Sven Nyhus also recorded Ola many times when he worked in Norske Folkemusikksamling (Norwegian Folkmusic Collection). Ola was not only a good fiddler. He was also clever at telling stories connected to the music he played, which put him in demand for entertaining in different settings. In this regard he was much like Olav Moe, with whom he was often together.

Fiddlemaker
At age 13 he made a fiddle himself. It was not the last fiddle he made, and he acquired many other fiddles later. In 1937 he got a fiddle made by Kjetil Flatin. Later he bought fiddles that Gunnar Røstad had made. One of them was among the best of this good fiddlemaker’s instruments. Ola bought it in 1960, and Lorents Hop from Fana was one of its earlier owners. We know that Ola was quite particular about having a good instrument with a first-rate sound.

Spelemannslag (Fiddling group)
Ola Grihamar Sr was the leader type. In 1948 a spelemannslag in Øye was established, and Ola was a central person in leading the lag. After a course with Sigbjørn Bernhoft Osa in 1962, Valdreskvelven Spelemannslag was founded, with members from Vang and Vestre Slidre. Eirik Steine and Ola Grihamar were among the most ardent supporters of this lag. Ola was its first leader, and for many years he and Knut Hemsing took turns at the helm. But the musical leader was always Ola Grihamar. At that time and for many years after, the lag had many good fiddlers as members. The lag and its individual fiddlers played often, and they did well in competitions. NRK made numerous recordings of the lag, the first in 1967.

Competition playing and judging
Ola didn’t didn’t participate in a competition before 1957, at Landskappleiken (the national competition), when it was in Fagernes. He advanced right away into the elite class. He seldom participated in later competitions, but he often served as a judge.

Cultural worker
Ola was very interested in local culture. Much of the credit for the restoration of Øye stave church belongs to him. He was active in finding suitable building materials for the project, and he was a driving force in the building of St. Thomas church on Filefjell. When the churches were consecrated, Øye in 1964 and St. Thomas in 1971, he played “St. Thomasklukkelåtten.” On this last occasion he played it from the pulpit. Ola also served in local government for a number of years and was foreman of the parish council several times.

Tradition bearer
Ola Grihamar represents a tradition that is not familiar to many others. There were certainly many good fiddlers in Øye during his time, but the meticulous work he undertook to learn the tunes and the history behind them distinguished him as a tradition bearer. Fiddlers who were together with him in the lag experienced his work, but many who knew the music best are now gone. A few years ago a CD of collected listening tunes from Valdres came out, which included some of Ola Grihamar’s recordings. But on this new CD we get to hear so much more of what has been collected and preserved from this good fiddler. It’s fortunate that so many of the tunes Ola Grihamar played can now come to light again. This music also documents the great variation and breadth of Valdres music.