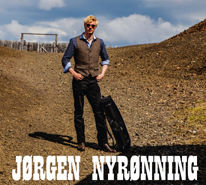 Ålen, in Holtålen municipality, is located furthest north in the Røros district. In this area, folk music has roots that reach far back in time. The first fiddles came to the district in the 1700s, and the fiddle has since been omnipresent as a folk music instrument. Traditional music in Ålen has been strongly marked by figures such as Anders J. Reitan (1826–1872), Anders Haugen (1852–1927), Jørgen Wehn (1834–1921), and Oliver Bekken (1877–1953). The music has always been for everyday use, with a strong emphasis on energy and dance rhythm. I remember well the first tunes I got the “knack” of playing. Drive and rhythm lay plainly and clearly in the tunes’ potential without my being completely aware of it; they just became this way. On this album I have picked out my favourite tunes, which generally consist of 17th century rock ‘n’ roll music from Ålen and the surrounding district. Many of the tunes have not previously been recorded. It is a great honour for me to be able to release this album. I hope you enjoy it!
/ jørgen

About Jørgen
In the autumn of 2001, a blond boy came to have a fiddle lesson with me at Hov School in Ålen. I had taken on a oneyear temporary position as a substitute for Borghild Reitan Solli, who was the fiddle teacher at Holtålen Culture School. I had met this boy before. I had also heard him play and had looked forward to this meeting. The boy picked up the fiddle, and I asked him to play a tune. After tuning his fiddle, he started to play. The tune that flowed out of the fiddle was the pols “Litjbrekkingen”, which the boy said was in a form after the playing of Jens Vårhus from Hessdalen. I was enthralled by the first note. The boy played like a grown man at the age of 10! His spirit and intensity captured my attention. This was going to be a fantastic year! I sat back in the chair and was taken along on a journey. A journey that has continued since that moment. When the tune was over the boy looked up, and asked with inquiring eyes if what he had played was good? I had to truthfully say that it was great and that he had come very far for his young age. This became the start of a friendship, a friendship with the fiddler Jørgen Nyrønning. Over the course of few years, Jørgen developed quickly as a fiddler. Always hungry for new tunes, and preferably pols. The degree of difficulty increased with every tune. We gradually got more gigs together, concerts, playing for dance, CD recordings, and kappleiker
(judged competitions in Norwegian folk music and dance). Jørgen began playing at kappleiker early on and has earned good placings. At Landskappleiken in Seljord
in 2011, Jørgen qualified for the elite A class, and in 2012 he debuted in the A class, placing fifth. Over the years, Jørgen has been given several awards. He has
received Drømmestipendet, Holtålen municipality’s culture scholarship, a work scholarship from Bygdapreg in Ålen, a scholarship from Sparebank 1 MidtNorge, a work scholarship from Ålbygglaget in Oslo, and Fureprisen. Jørgen’s playing style is distinctive. He mastered open strings and double stops early on and it didn’t take long before the trills and ornaments were in place. A trademark for Jørgen. Early on I perceived that this was a person whose music had meaning. He has often surprised me with his versatility and musical understanding. It has been a great pleasure to be his fellow musician, teacher, and conversation partner. Now Jørgen has made his own music. For three days I had the great honour of being his producer and fellow musician during the recordings at Røros Church, Bergstadens Ziir. These were three days rich in memories.
A young fiddler with something to say.
/ john ole morken