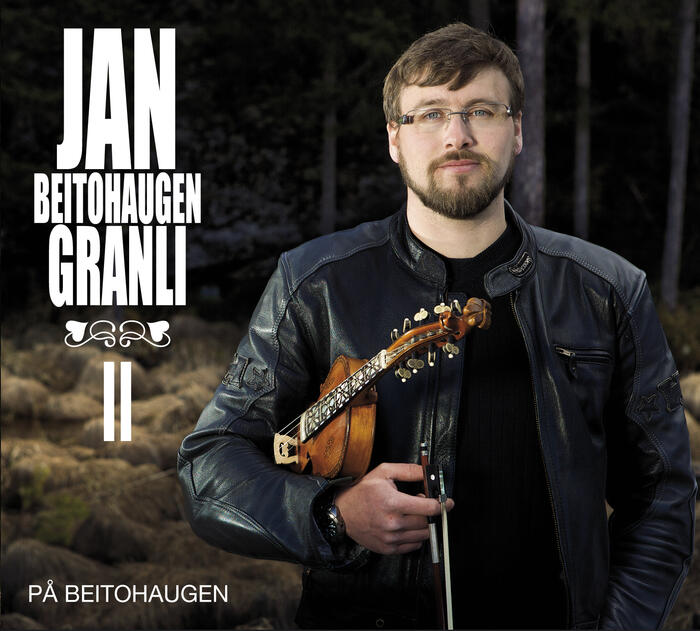 I was first introduced to the Beito style by my grandfather, Ola Beitohaugen (1919–1996). Granddad came from the farm Rødningen in Robølsbygda, and later settled at Leira. He was a butcher and sausage maker with an exceptional talent for handling animals, and an excellent dancer. We used to drive around Valdres in his white Toyota Corolla, and on these trips we always brought a cassette recording of Engebret Beitohaugen. He was fond of taking back roads and telling stories and anecdotes of farms and people in the area. We ate lemon drops and had a good time. We had all the time in the world, and the cassette would usually get played more than once. My granddad was overjoyed when I took up fiddle playing, and took every opportunity to dance. It was always great fun when Granddad joined the dance at Slidrehuset during the Hilme festival.

When my grandparents passed away in 1996–97, I lost touch with Engebret’s cassette. In later years, however, digital technology has brought us back together. Car CD players and mp3 players make room for the music: at airports and on streetcars, in the waiting lines of government offices, backstage before a concert or on a fishing trip by a quiet river. I bring the music with me wherever I go, and usually have a fresh set of ideas long before the next playing session. I have a lot of vivid, fond memories of the times I spent with my grandfather, and I like to think that they have influenced my attitude to fiddle-playing in many ways. I was a small boy allowed into a world that was strange and unique, but still very safe and familiar as long as I had my grandfather by my side.

My intention with this recording has not been to mimic Engebret’s playing style, but rather to acknowledge what he has meant to me and show the inherent power of this music. The forgotten tunes and strange fingerings of the fiddlers at Beitohaugen seem to be fading from contemporary traditional music. These tunes had their heyday among fiddlers in Øystre Slidre in the 20th century. Although good tunes are abundant on the championship circuit and in the dance halls of today, they have little in common with these strange, obscure tunes. While working on this record, I have had opportunity to immerse myself in a number of interesting, exciting themes. Hopefully you, too, will take a different view of Valdres playing after listening to it.

Welcome to a session by the fireplace at Beitohaugen!

Dedicated to my grandfather

Beitohaugen Nils Nilsen (1838–1924) came from Høresbygda in 1855 at seventeen to take over the farm of Beitohaugen. He married Marit Beito (1829–?) from Niegarden Beito. They had a son, Nils Nilsen (1863–1927) and a daughter, Marit Nilsdotter (1867–1949). Marit died young, and Nils Nilsen remarried in 1888. Nils the fiddler married Sissel Engebretsdotter Beito (1865–1949) in 1887. For several years, the two couples shared a small cottage with a sleeping compartment and kitchen. When the older couple grew tired of the kids’ racket, old Nils bought a timber cottage from Skammestein and moved it to Beito around 1890. The old ones moved into the new cottage, while fiddler Nils and Sissel stayed in the ‘main house’. (In 1920 old Nils had had enough of the low ceiling in the small cottage, took the roof off and added some height to the walls. He was 82 at the time.) Fiddler Nils and Sissel had twelve children in all; ten of them lived. From 1927, their son Engebret (1893–1963) ran the farm for some eleven years until his brother Ola (1903–1979) took over in 1938. Ola sold the farm to his nephew Nils Tormod Tørto (1940–) in 1962, and nowadays it mostly serves as a holiday home for Nils Tormod and his family. The land is still being farmed, even though it’s not inhabited all year.

Nils Nilsen Beitohaugen (1863–1927) was a tinsmith, a blacksmith, and a maker of jew’s harps and watches. He was known as an excellent craftsman, but his artistry was most evident when playing the fiddle. He studied at an early age with Lars Larson Krøsshaug, who owned the neighbouring farm, and then later with Jøger Sagahaugen, Torger Hegge, Gullik Okshovd, Andris Bunde and Haldor Rudi. Lars Larson came from Høresbygda, and settled in Beito around 1863. He is listed as a smallholder in 1865. Lars died in 1888, so Nils must have been a model student to have picked up so much of the Krøsshaug style. Lars’ brother, Andris på Teige, visited his brother frequently. Andris lived at the farm Teigen in Høre. Nils made sure to visit Lars when his brother was there, and was thus able to learn from both Krøsshaug brothers. Nils’ playing is described as being in the Krøsshaug style with traces of Sagahaug, crystal clear and very sensitive.

In the spring of 1948, the community erected a monument to Nils, bearing a poem carved by his son Engebret:

Engebret Nilson Beitohaugen (1893–1963) learned most of what he knew from his father. In his father’s smithy he learned detail work and tinsmithing, he learned to repair watches and, naturally, to play the fiddle and jew’s harp. In addition, he went to carpentry school to learn wood carving. He got himself a foot-operated lathe to make various household items that he gave away to his siblings and family, wanting all of them to own something he had made. Although Engebret was singled out as the family’s next farmer, he never married, so his brother Ola took over the farm in 1938.

In terms of playing style, Engebret was not very influential in Øystre Slidre. He felt that the tunes were diluted and distorted with new versions and fingerings, and that the legacy of the old fiddlers was not held in proper respect. With time, he withdrew from the fiddlers’ community in Øystre Slidre and turned to Høresbygda and Vestre Slidre, where he was well received as a performer in the Krøsshaug style. He attached great importance to continuing the Beito tradition as it was meant to be, and not ‘like a sock darned with the wrong kind of yarn’, as Gudbrand A. Beito puts it. His many recordings from the 1950s and 1960s bear witness to the musical treasures that Engebret possessed.

Engebret died on July 23, 1963, still clutching his fiddle, in his bed at Beitohaugen. This marked the end of a century of master fiddlers in Beito.

Fiddles used:
Bekatrøget: Hardanger fiddle of the Trondefele variety, built by Trond Isaksen Flatabø. The prosaic name was given it by Engebret. According to Gudbrand A. Beito, this is undoubtedly the most perfect fiddle Flatabø ever made, but this statement may well be strongly influenced by the fact that it was owned by Engebret.

Hardanger fiddle by Hauk Buen, 2007: The varnish on this Hardanger fiddle had hardly dried when I bought it from Hauk Buen. I am grateful to Hauk for providing us with such excellent instruments for our craft. A fabulous fiddle.

Video:
The CD also contains a music video featuring Jan, produced by Fabelaktiv. Watch it with your computer’s video player. The video is also available at www.talik.no.

Den so styggen blistra ner’n begrov mor si (What the Devil Whistled When He Buried His Mother) This springar in the ‘green’ tuning is a staple at Beitohaugen. The title just about sums it up. I got this tune from Harald Røine (1941–1998).

Fanteladda ‘Fanteladda’ was the nickname of a girl who just couldn’t stop dancing. Then a stranger came in, danced with her and finished by throwing her up in the air. Fanteladda stuck to the ceiling and didn’t come down alive. This is an oft-played tune that I know from several sources, but Engebret’s take on it was fresh and unusual.

Røyskatten (The Stoat) After Engebret Beitohaugen. I have only rarely heard this one played by fiddlers other than Engebret. Røyskatten is an exceptional dance tune, but quite challenging for the performer.

Okshovdspringar på låg bas (Okshovd-springar in violin tuning) This is a tune after Ola G. Okshovd (1872–1960), one of the master fiddlers of Øystre Slidre. Born in 1872, Ola was 9 years younger than Nils Beitohaugen (1863–1927). Although they were fierce rivals, word has it that Ola Okshovd took good care of the tunes after Nils Beitohaugen when Nils passed away in 1927. A fine tune indeed.

Låtten hans Andris på Teigen (Andris from Teigen’s Tune) Andris Teigen, or Andris L. Krøsshaug (1821–?), was the son of renowned fiddler Lars Mikkjelson Krøsshaug (1785–1830) from Vang. Andris’ brother, the fiddler Lars L. Krøsshaug (1812–1888), moved to Tørto in Beito and became the mentor of Nils Beitohaugen. This tune has been shaped by several great fiddlers, and I got it from Engebret and Ola G. Okshovd.

Ukserauten (The Roaring Bull) After Engebret Beitohaugen. I think Engebret’s rendering of this concert piece is exceptional. The tune is also known as Raudalsuksin (‘The Raudal Bull), and is said to be based on an unusual bull roar heard by a milkmaid in Vang. The tune is rarely heard these days.

Jålin I got this tune from Olav Jørgen Hegge (1941–2005), who helped me fashion it in the traditional Beito style. Jålin is said to have been a favourite of Nils Beitohaugen, and is closely associated with his name.

Risten (The Shake) A snappy tune in both title and style. Trygve Bolstad taught me this one, but listening closely to Engebret changed it quite a lot.

En grønn en tell (Another Green One) Another springar in the ‘green’ tuning. This one was taught me by Harald Røine. Strictly speaking, this tune has no title, so I’ve named it after the way Harald would introduce it. Tunes seemed to take on a new life when played by the fireplace at Beitohaugen.

Waltz A short waltz popular at Beito and southwards throughout the valley. To quote the producer: ‘I’m not exactly bored with this one!’ I learned it from Engebret Beitohaugen.

Låtten hass Endre (Endre’s Tune) After Engebret Beitohaugen. Whoever Endre may have been, he must have been a fun fellow to have such a fun tune named after him.

Likferdsalmen åt Johma (Johma’s Funeral Psalm) The fiddler Andris Johme had just helped put his wife to ground when he had to take a leak. As he stood there, he hummed this tune to himself, or so he thought. In fact, it was overheard by several of the mourners, and has since been known as the Funeral Psalm. It’s a pleasant tune that has won me many friends in the West.

Gjartrud på Haukaland (Gjartrud at Haukaland) Engebret was fond of playing this tune, which exists in several forms in Southern Norway. I share his enthusiasm. I know this tune from several fiddlers, but Engebret’s version is the most important to me.

Beitingen i Haugen This tune is named after the fiddler Gudbrand Beito Haugen (1885–1971), Nils Beitohaugen’s foremost student after his son Engebret. Here, too, I am in debt to Olav Jørgen Hegge for his assistance in shaping the performance. A Valdres tune of the finest pedigree.

Systerlått på ljøsblått (Twin Tune in Light Blue) This is the second of two closely related tunes in the ‘light blue’ tuning recorded by Engebret, and possibly the ‘oddest’ of them. I play this tune on Bekatrøget, Nils Beitohaugen’s old fiddle.

Låtten hass Mikkjel Moe (Mikkjel Moe’s Tune) A ‘light blue’ springar inspired by Ola Bøe (1910–1985) that I learned from Harald Røine at a seminar held by the Valdres Museum of Folk Art and Architecture many years ago. Again, I’m using Bekatrøget.