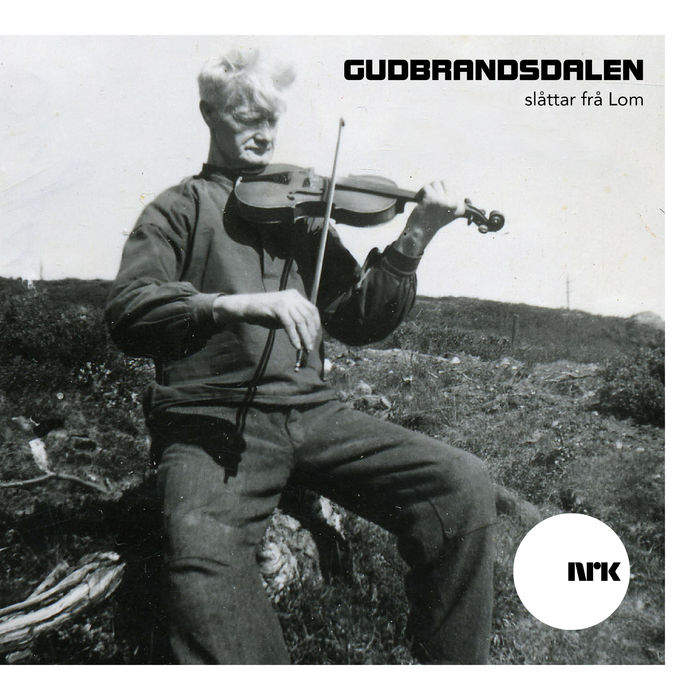 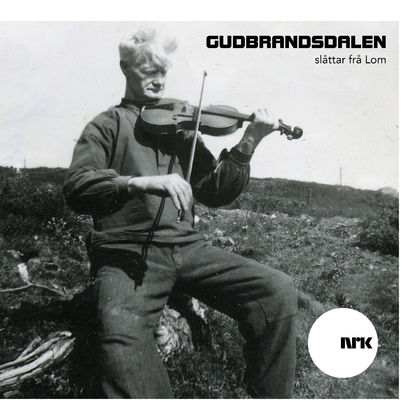 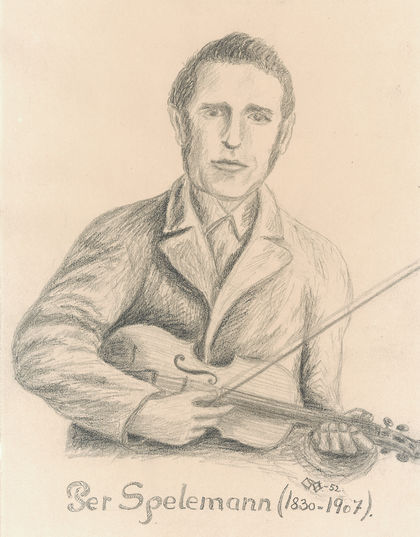 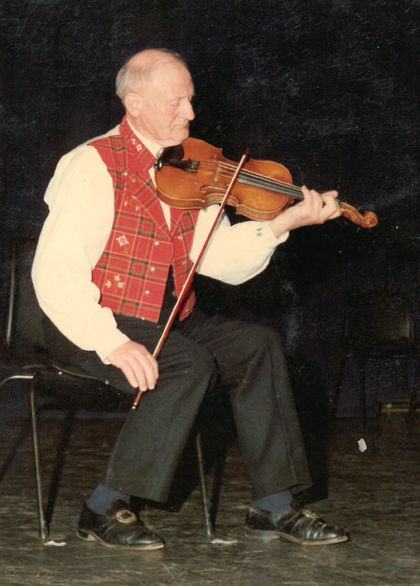 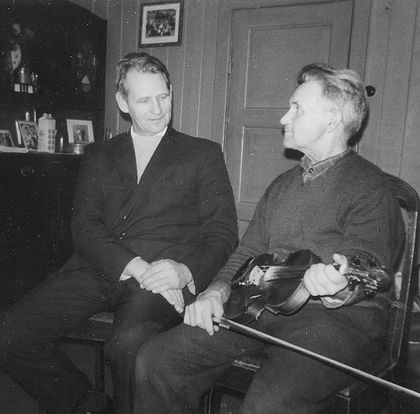 In Norway, the municipalities of Lom, Vågå, and Skjåk are central areas

for folk music played on regular fiddle. There has been an active folk music and dance tradition in Lom since the 18th century, and there were two concessionaire fiddlers in Lom and Skjåk, Ola Halldogsen and Kristen Turrmoen (also known as «Spelmann-Kristen»). Fel-Jakup (1821– 1876) was the greatest fiddler of them all, and according to tradition, he towered over the other fiddlers. Jakup played with Rolv Gaupar (1824–?) and Jo Krøkje (1824–?). They were highly regarded and were referred to as Lomspelmeinn by Iva Bråtå in Vågå, among others. Rolv Gaupar and Jo Krøkje emigrated to America, and we do not know exactly when they died. In spite of mass emigration from the districts in Lom, many great fiddlers remained, so the music has been passed on in unbroken tradition. In his book, Ei spelmannsoge, Erling Kjøk writes about fiddlers from Lom and elsewhere in Ottadalen, and he recounts that there were many fiddlers who preserved the music and passed it on. Many fiddlers learned from and played with Jakup, and Per Kringelhaugen (1830–1907), who was also known as Per Spelmann, was the most renowned of them. Per was a teacher and source of tunes for several fiddlers, including Sigurd Eggen and Ola Moløkken, and there has always been a strong network of fiddlers in the area. When a competitive class for regular fiddle was introduced at Landskappleiken (Norway›s annual national folk music and dance competition) in 1924 in Molde, Ola Moløkken entered and won. Ola also won in 1926 and 1932. This may be one reason that so many fiddlers from Lom have participated actively at Landskappleiken, and that eight fiddlers from Lom are responsible for 40 of the victories in the A class for regular fiddle.

Fel-Jakup (1821–1876) was the most well-known fiddler who lived in Lom and Skjåk. He was born in what is currently known as Skjåk municipality, but outside of the district he often went by the name «Loms-Jakup», since Skjåk was a part of Lom municipality until 1866. He played for the famous violinist, Ole Bull, and Bull once said that Myllarguten had the finest tunes, but Fel-Jakup was the best player. Jakup showed an early talent for fiddling and apprenticed in both tailoring and fiddling under Gamel-Sjugurd Hjeltartredet (1810–1889). About Jakup, Gamel-Sjugurd is quoted as saying: “He’ll be a great fiddler, because he has such a sharp mind for music, and his manual skill is so good” (Erling Kjøk: Ei spelmannsoge). The renowned Traveller fiddler, Fant-Karl (probably Karl Johansen Rosenberg, ca. 1775 – ca. 1855), came to the valley, and Jakup travelled with him for several years. Jakup played so well and made such an impression that he became a well-known fiddler in the Røros area, in Trøndelag, and in northwest Norway. Fel-Jakup exchanged tunes wherever he went, and this is probably the main reason why Ottadalen has a large number of tunes in common with these areas. No fiddler in the valley has been discussed and written about to the same extent as Fel-Jakup. This is an indication of the prominent

Per Kringelhaugen grew up in Lom, but settled in Bøverdalen as a young man. He lived in several places in Bøverdalen before marrying Eldri on the Kringelhaugen farm, where he remained for the rest of his life. Per apprenticed to become a shoemaker, and shoemaking became his occupation. He began playing fiddle at a young age, and Rolv Gaupar was an important teacher. Per is quoted as having said that he thought Rolv played some tunes better than Jakup. Fel-Jakup later became both

a teacher and a friend, and the two of them travelled together to the market in Romsdal at least seven times. On these trips, they would be gone for weeks: they were so caught up with fiddling that they did not hurry to get home. On trips such as these, Per learned a great deal from Fel-Jakup, and thus came to be the main inheritor of his music. Per was also known as «Per Spelmann». After Fel-Jakup passed away, Per became the most popular fiddler in Lom. He was the obvious choice to

perform at banquets, and Per rode in front of many bridal processions. He also played at markets, auctions, balls, and other events where there was a need for music. It was natural that other fiddlers came to Per to learn. As such, he became a source of tunes and a teacher for many fiddlers. Both Sigurd Eggen and Ola Moløkken learned from Per Spelmann.

The Fiddlers on this CD

Ola showed an early interest in fiddle music, and he tried to make his own fiddles. His mother was not happy about this, and she destroyed the fiddles when she got hold of them. But then Ola got a very good fiddle, and he was able to practice and perform. Ola mentions three important teachers. The first was Lars Kjørren (1826–1890), who lived in the same local community. Later on, Ola lived in Bøverdalen for a few years, and while he was there he played with and learned from Per Spelmann. A third teacher Ola mentions is Ola Ringneset (1811–1902), the master fiddler from Vågå. Ola Moløkken sometimes worked at the summer mountain farms by the Tesse lake, and he said that Ringnesen often came here during the evenings, and they would play and learn tunes. Ola also found a playing companion in his local community: button accordion player Knut Runningen (1866–1947). The two of them were referred to as “Knut og Lykkjen”, and they played at dances for many years. Ola was an influential teacher, especially in Garmo. Everyone who played fiddle in the district learned tunes from him, and typical tunes Ola played were often called “Lykkje Tunes” (Lykkjeleikje). He won Landskappleiken three times, and in 1948 he made a recording for NRK (Norsk rikskringkasting, the Norwegian state-owned public broadcasting company). Ola recorded 24 tunes, and these are some of the most important folk music recordings we have in Lom. The tunes Ola plays on this album have been selected from these recordings. Ola received the King’s Medal of Merit, and was made an honorary member of Landslaget for Spelemenn (now called FolkOrg).

Sigurd Eggen grew up in Lom, among many fiddlers. He started a family and moved to Bøverdalen, where he worked as a shoemaker and a stonemason. Per Kringelhaugen lived in Bøverdalen, and he became Sigurd’s teacher and role model. From Per, the tunes go back to Fel-Jakup, Gamel-Sjugurd, and others. Per was also a shoemaker, so Sigurd learned both shoemaking and fiddling when he visited. Sigurd often played for dance, especially in Lom and Skjåk, and he walked many

miles by foot with his fiddle under his arm. His playing was very energetic, and he had an extensive repertoire of tunes. Sigurd was a role model and teacher for younger fiddlers in both Lom and Skjåk, and there are many tunes that are referred to as being after the playing of Sigurd. He competed in kappleikar, and at Landskappleiken in 1957 he won first prize in the category for elder fiddlers. Sigurd composed several fine tunes, and the most well-known of them, the springleik “Gamel-Haugjen”, is played throughout Ottadalen. Sigurd was an honorary member of Landslaget for Spelemenn.

Johannes was the youngest of 13 siblings. He had a musical family, and both of his parents were good singers. Johannes was also a skilled folksinger and sang with an older tonality, but he didn›t sing for an audience very often. He preferred to sing at home with few people present. On the other hand, he was a very active and wellknown fiddler. He and Ivar Kolden (1900-1973), who called themselves «Johannes og Iva», played a great deal for dance in Garmo. Johannes was a member of Lom Spelemannslag from the time the group was established in 1942 until the 1980s. He also competed often at kappleikar, and he always looked forward to going on stage. For Johannes, the joy of playing reigned, and not his nerves. Johannes had a free and light playing style. He had a flexible bow hand, so he was a pleasure to watch and to listen to. Even Johannes’s foot tramping was unusually elegant. He didn’t stamp his foot hard, but gave a light indication of the beat and lifted his foot up

right away. Johannes composed several tunes, and the springleik “Skjellbergjen”, which he was probably most proud of, is included on this album. He made his first recording for NRK in 1952, and his last in 1984, at the age of 83. He had a steady bow hand and passion in his playing up until the last years of his life. Johannes was an honorary member of Landslaget for Spelemenn.

Among more recent fiddlers, Erling Kjøk was the fiddler who knew the most tunes, and he also had extensive knowledge about folk music traditions. In addition, he was an eager collector of vocal folk music. He had an unusually good memory, and he transcribed many tunes. These were collected in the book Ei spelmannsoge (1995). Erling is also the main source for the large collection of transcriptions called Slåtte og leikje (2012), which his son, Knut, published. Erling and several other local

fiddlers played together during the 1930s. This served as the origins for Lom Spelemannslag, which Erling helped found in 1942. He was the group’s leader for the first 10 years. Both before and after the war he played a great deal for dance in several districts. But then he went to Oslo for work, and he commuted for many years and played less during this time. During the 1970s Erling received new inspiration when Sven Nyhus, from the Norwegian Collection of Folk Music (Norsk Folkemusikksamling, or NFS), made recordings of him. Erling recorded both fiddle music and folk songs and was one of the most important sources for NFS. Erling had many sources and teachers in various districts. In particular, he mentioned three men named Ola: Ola Moløkken, Ola Nystugun (1875-1946) from Vågå, and Ola Gjerdet (1871-1952). He rated Ola Gjerdet in Lom the highest. In his book, Erling writes: «I wanted to find and learn the oldest and best tunes. This is exactly what I found when I played with Ola Gjerdet, and I didn›t even have to ask.» Erling also composed several tunes, and «Krokhallingen», which has been played at several kappleikar, is on Lom Spelemannslag’s repertoire. He had an energetic playing style with a distinctive sense of rhythm and tonality. Erling was an honorary member of Landslaget for Spelemenn.