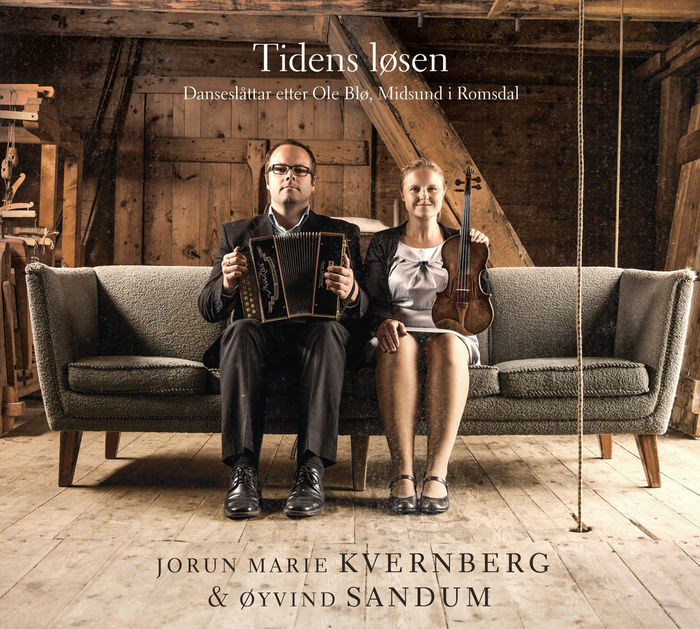 The dance tunes after Ole Blø

This CD collects some of the many dance tunes from fiddler Ole P. Blø’s (1920–2010) repertoire. Ole grew up on the farm Blø on Midøya, an island in the municipality of Midsund in the outermost part of Romsdalsfjorden. He grew up in the midst of a highly active fiddlers’ scene.

Gamaldans (Central European dance forms brought to Norway in the mid-19th century, e.g. polka, reinlender, waltz, mazurka) was the music at the time, accompanying the locals at dances and weddings and providing entertainment. When Ole was young, he was strictly forbidden to touch the precious fiddle owned by his father, Peder Olsen Blø (1883–1957). But in 1930, Ole’s father was out fishing all through the winter, and little by little tenyear- old Ole stealthily taught himself to play.

His grandmother, Ane Marta Pettersdotter Blø (1860–1944), heard the young boy trying to play the fiddle. Although a highly religious woman who considered the fiddle a sinful instrument, she was also musically gifted and couldn’t resist correcting his mistakes and helping him learn how to play. When the fishermen came back home in the spring, Ole had taught himself enough to convince his father to let him continue playing. From that day on, Peder was Ole’s teacher and musical companion. Later on, Ole came to meet many musicians, and accordionist Jonas
Nygård became his regular partner. Together, they made a lot of great music both for dancing and local entertainment.

Today, island communities are often considered isolated. But in earlier times, most of the main traffic arteries were at sea. Ole could tell of ships coming in to the islands for shelter and remaining there, weather-bound, for weeks on end. The sailors brought with them different cultures and music from other small communities. In the innermost parts of the fjords, this did not happen until much later. Ole also told stories of unrigged ships coming in from Bergen, Stavanger and elsewhere during the latter half of the 19th century to harvest the ‘silver of the ocean’, the
herring. They often had fiddlers on board. Local fishermen, too, travelled far and wide to the North and South, bringing home a lot more than just fish. This is how the modern dance forms, the round dance, came to the
islands.

Ole worked as a fisherman and farmer, with his fiddle as a life-long companion: ‘The fiddle has meant a great deal to me. It kept me company when I was alone. It has happened that I’ve been at work and a tune has come to me, and I’ve had to play it! I used to sit down just to play, too, but that was when I was younger. Even so, I still have the fiddle close at hand, and I play it sometimes when I want to try out a tune. These old tunes that you’ve heard sometime in the past keep cropping up.

I’d say the fiddle has meant everything to me. I’ve never regretted playing. No, really, I’m glad. I love my fiddle! Heh heh! Yes, I do. So it’ll accompany me to my grave.’
(From an interview in 2007)

The story of my meeting with ole blø

This is the story of how I once again came to love the gamaldans. The gamaldans tunes had been with me since childhood, just like the dance tunes. But as I grew older, I was told that the older material, the springar and
halling tunes, was the most valuable. This was my perspective when I went out to collect tunes for the first time as a young student. Fiddlers that had grown up with just a vague recollection of those older dance tunes were still probed mostly for these, while the gamaldans was something that I had to collect just to keep up appearances. To me, the incessant arpeggios signalled a lack of identity; the same melodies were played over and over in different meters and tempos. It was probably while hunting for a really unique springdans that I got hold of a cassette with recordings by fiddler Ole Blø. His few springar tunes were a bit idiosyncratic, with changing meters and a quite loose rhythm. Ole himself had never played springar tunes at dances, and could only remember the tunes being danced to once.

I didn’t immerse myself further in the springar recordings by Ole Blø. But on the same cassette was a vast array of gamaldans tunes played in a way I had never heard before. Here, the dance rhythm was the centre of attention. The sound was crisp and breezy, and the fiddler was generous with trills, glissandos and fingering. His performances were so playful that one would think he was a young boy who’d never had a bad day in his life. But in fact, Ole Blø was 63 years old at the time of the recording, and when I met him at 83 in 2003, the playfulness and zest was still there. His fingers bounced and drifted up and down the finger board, though perhaps not exactly the way he wanted
them to.

Many of the tunes after Ole Blø stray ever so slightly from what might be considered harmonically logical, or they have an extra bar to break the symmetry. The tunes are technically challenging; for instance, most of them climb the fiddle neck at least once. Ole’s sterling performances also provided me with a whole style of playing to aspire to. I had considered the gamaldans stagnant, standardised and simple. Ole’s music opened up a new world to me – and once again, I fell in love with gamaldans.
Along the way I also found a great friend and a huge idol. I hope that some of Ole’s trills, glissandos and easy strokes will live on in my music.